A DREAM of mine has always been to go to Italy. As an avid Italian food lover, wine lover, and pizza fanatic, it always seemed like a little piece of heaven on earth to me.

So, in December, I happened to be browsing Groupon for Christmas gifts and things like that, and stumbled upon an “8 Day Fly and Drive Getaway to Tuscany & Milan.” The deal, the timing, and the price seemed too good to be true, but knowing that Groupon deals can sometimes come through HUGE when it comes to vacations (we took a Groupon to Mexico when we got engaged and ended up with a second, free trip out of the whole thing a couple of years ago) I decided to look into the deal.

After a little research, we decided to go for it. The planner in me decided to create a full itinerary, and to modify the Groupon trip a little bit so that we could get more out of our stay in Italia. While we were there, I keep a “travel diary” of sorts on Facebook to keep open communication with friends and family back in the states who wanted to stay in the know, and it allowed me to document the whole thing! I’ve put it together here in one place, and changed it to past tense! I hope you enjoy it!

For the sake of not having one MASSIVE blog post – I’ve broken this into three!

Day 1: Flying to Italy & Driving for the first time in Europe

The Groupon deal had us flying out of JFK, so we drove up there from Richmond – about a 7 hour trip. We flew out of JFK around 11pm on an Emirates flight (which was amazing BTW – UNITED AIRLINES NEEDS TO STEP IT UP!) On the flight we got to watch new movies, have a full dinner and breakfast, and a warm towel to wake us up in the morning. 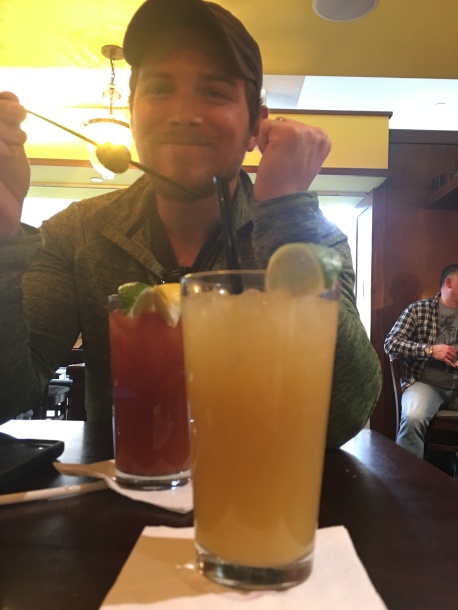 After we opened our eyes and our window on the plane, we looked out to see the Swiss Alps! It was crazy huge, the picture truly does not do it any justice (I’m sure you will find me saying that a lot throughout this post). 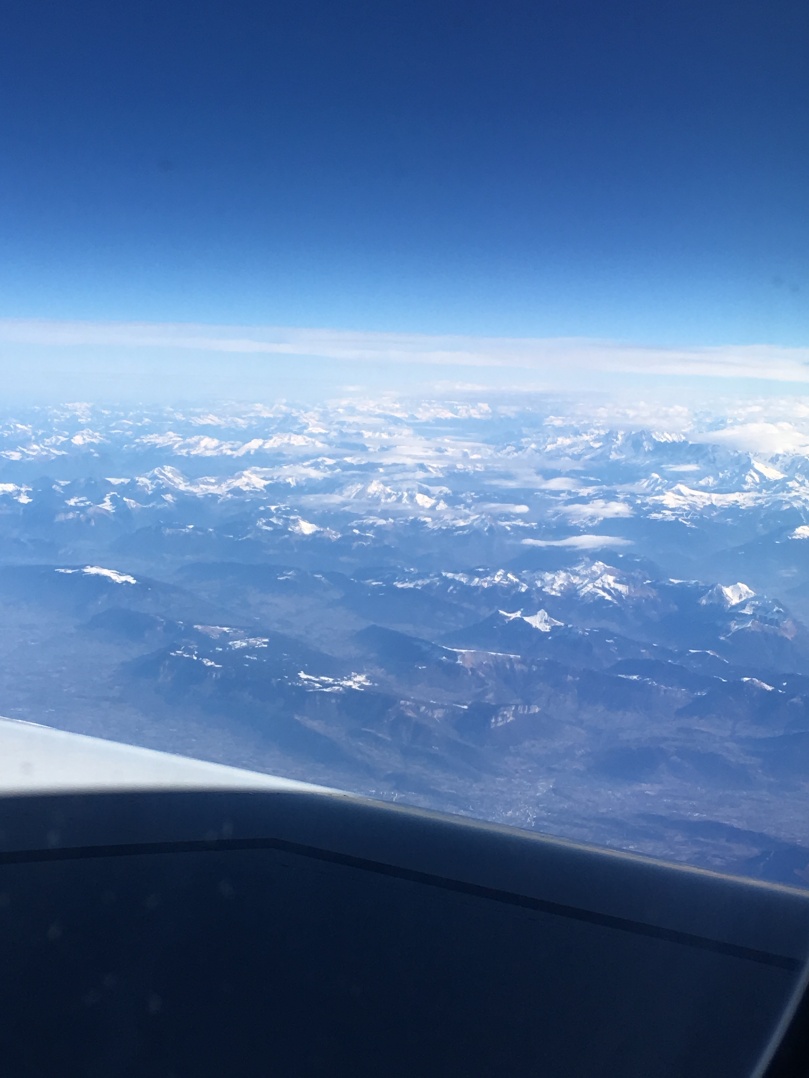 Going through the Malpensa Airport was pretty easy – dealing with the rental car guy was not, but eventually we got out of there and to our little Fiat 500 that was waiting in the parking lot.  Goodman has recently gotten super into Top Gear and was probably more exited about driving the Italian highways as he was anything else in Italy. I was just happy it was a stick so that I had an excuse not to be the DD at the wineries (hahah). 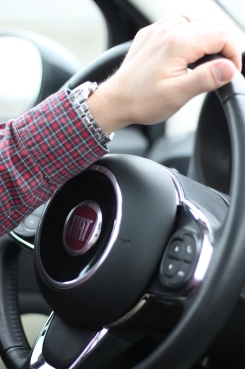 A four and a half hour drive down the coast later, and we arrived at our little village in Tuscany, Montecatini Terme. We weren’t able to see too much on the drive because of the rain. But driving through the fog and seeing the mountains was incredibly beautiful! I didn’t even take any photos because we were just soaking it all in.

As soon as we checked in and made it onto our balcony we saw the most beautiful sunset – it was like something out of a movie, seriously! We relaxed for a little bit and then walked around town until we found a little wine bar that was open.

The bartender (? not sure if that’s what they are really called in wine bars) scoffed at us for asking for Pinot Noir – and tested our wine tasting skills by giving us two glasses of very different wines, and asking us why we liked or disliked each of them (in very little english). He also brought us a slab of wood with salami, prosciutto, and bread with what we think was foie gras on it and asked us to try it with each of the wines, on the house. 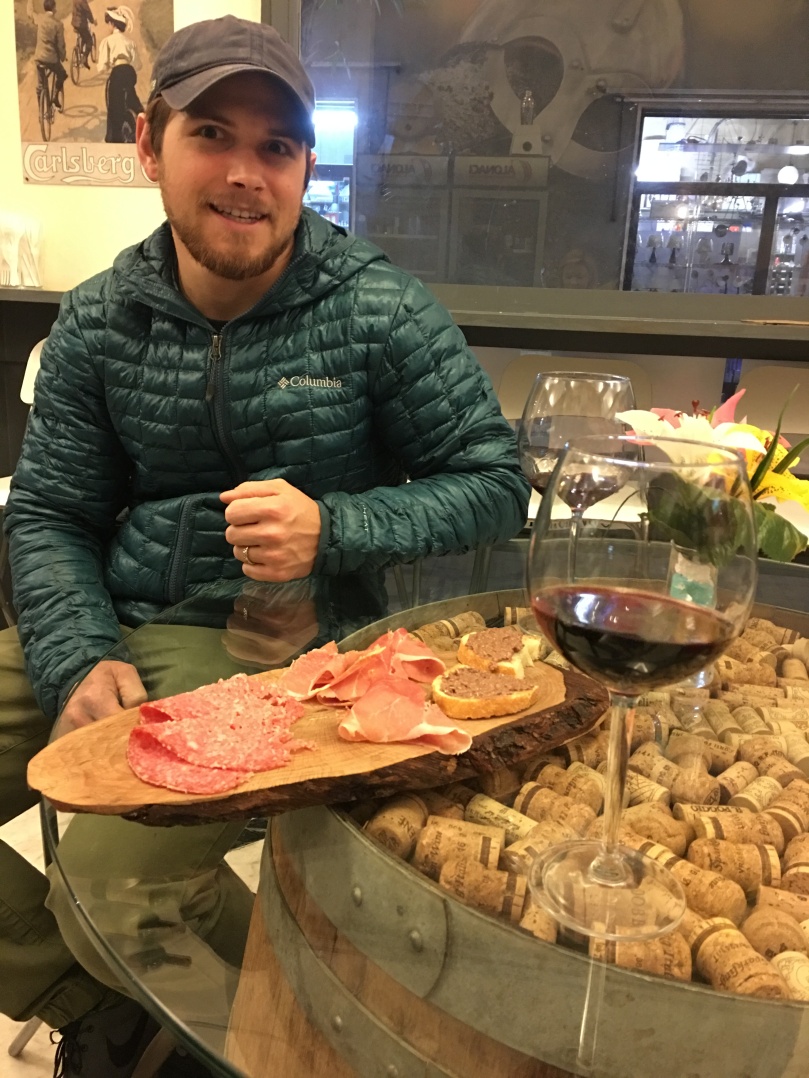 We ended up learning that aged, fine Italian wine is 100% better than we even expected, and that Italians are very hospitable hosts! We bought a bottle and took it back to the room.

We woke up and had a great breakfast of meats and croissants at our hotel. Then we walked around town looking for a barber, because Goodman didn’t have time to get the beard shaved before we left, and was sticking out like a sore thumb in Italy.

We found a super cute barbershop close to the piazza, and Goodman got an authentic Italian haircut and shave by a barber named Fabiano. He was extra careful on Goodman’s hair because he was training his apprentice! 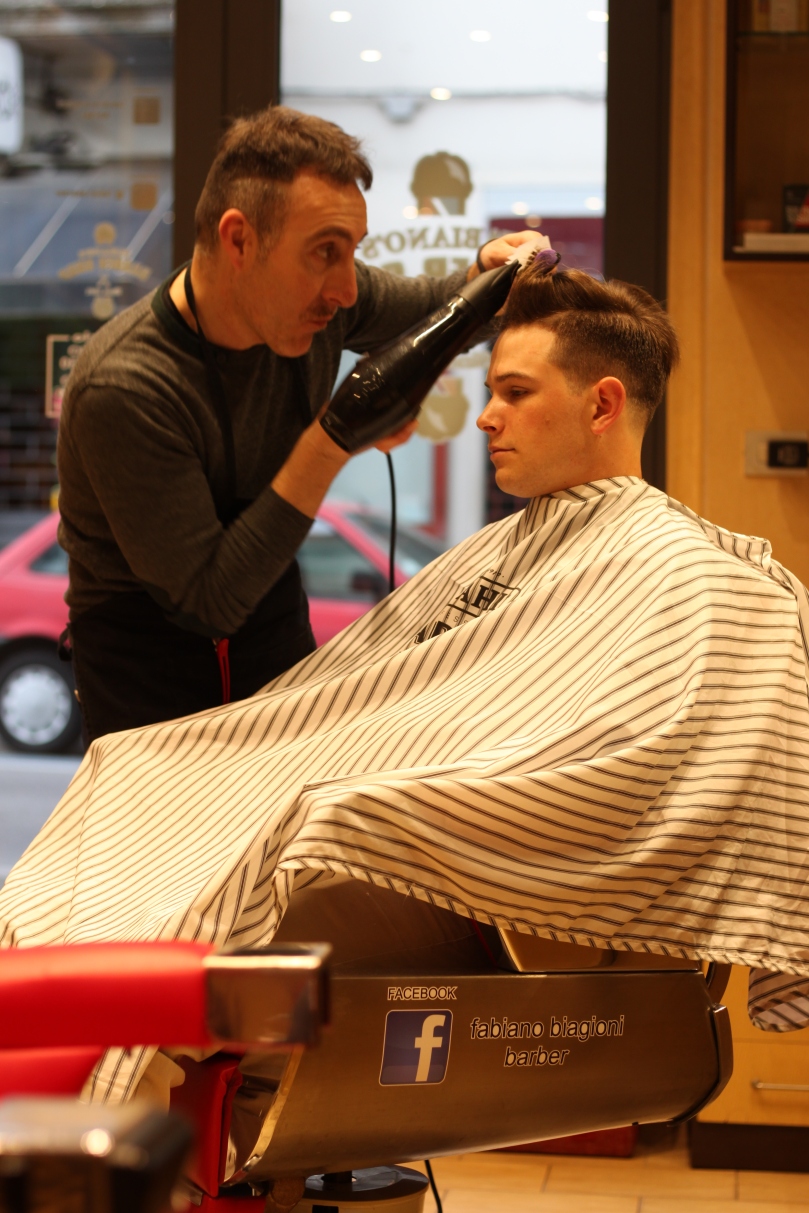 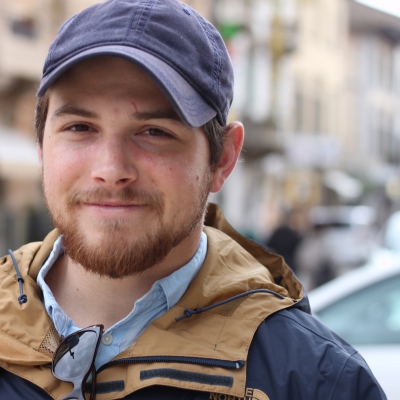 We ventured up to the top of the mountain above us called Montecatini Alto, and explored a few classic churches and neighborhoods. Alto was basically deserted because it was the off season, and most of the homes up there seemed to be vacation villas. However, in the churches, there were burning candles at the altars which was a little spooky given that we didn’t see one person the entire time we were up there! This was probably my favorite part of the trip to be honest. It was like a dream being in this beautiful but deserted Italian neighborhood! 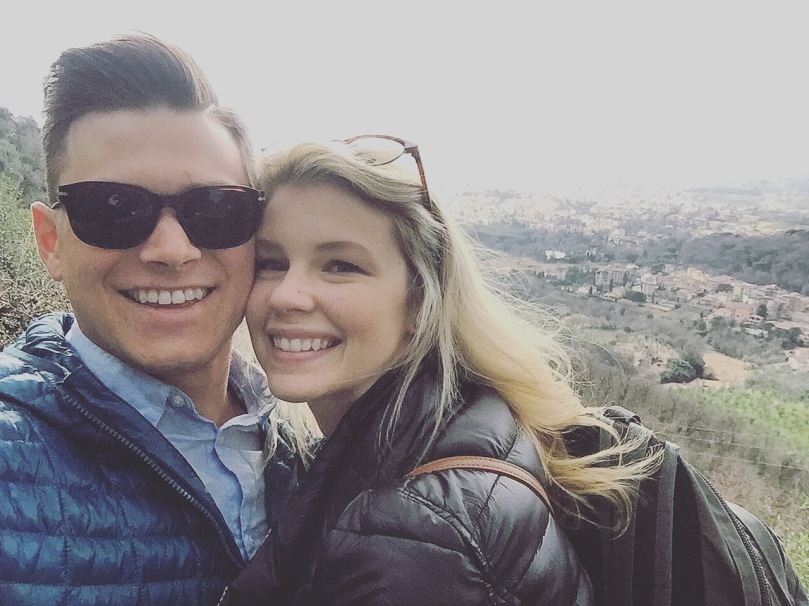 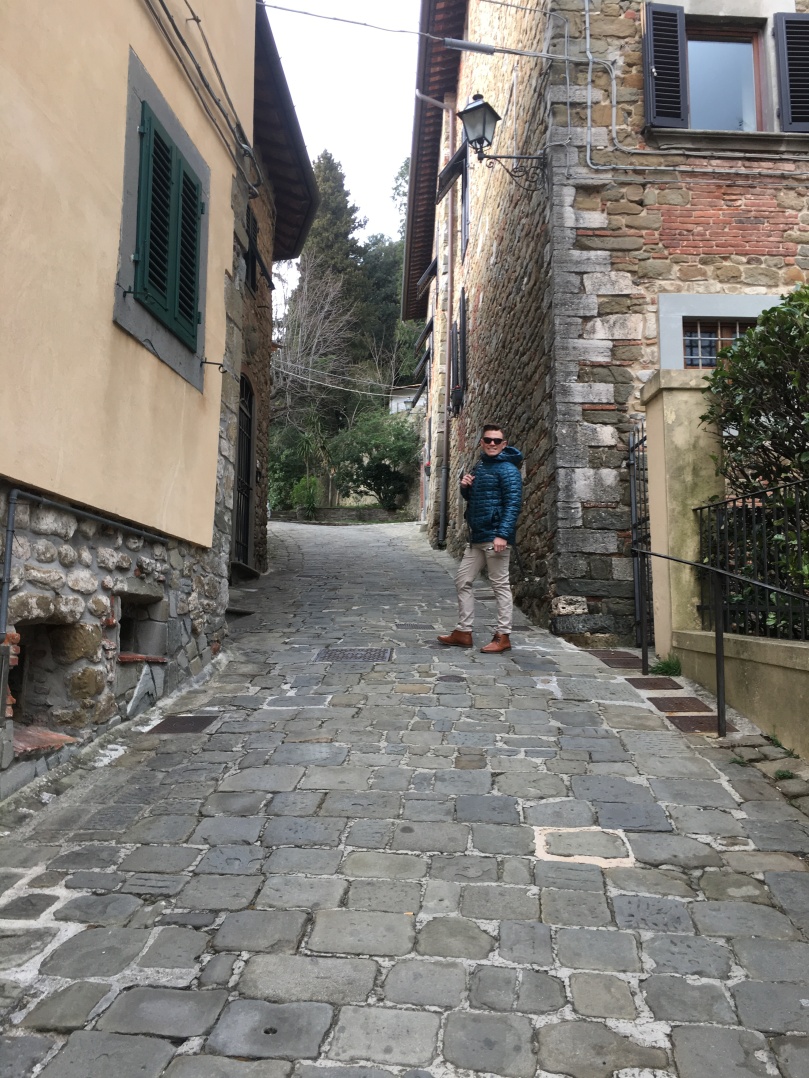 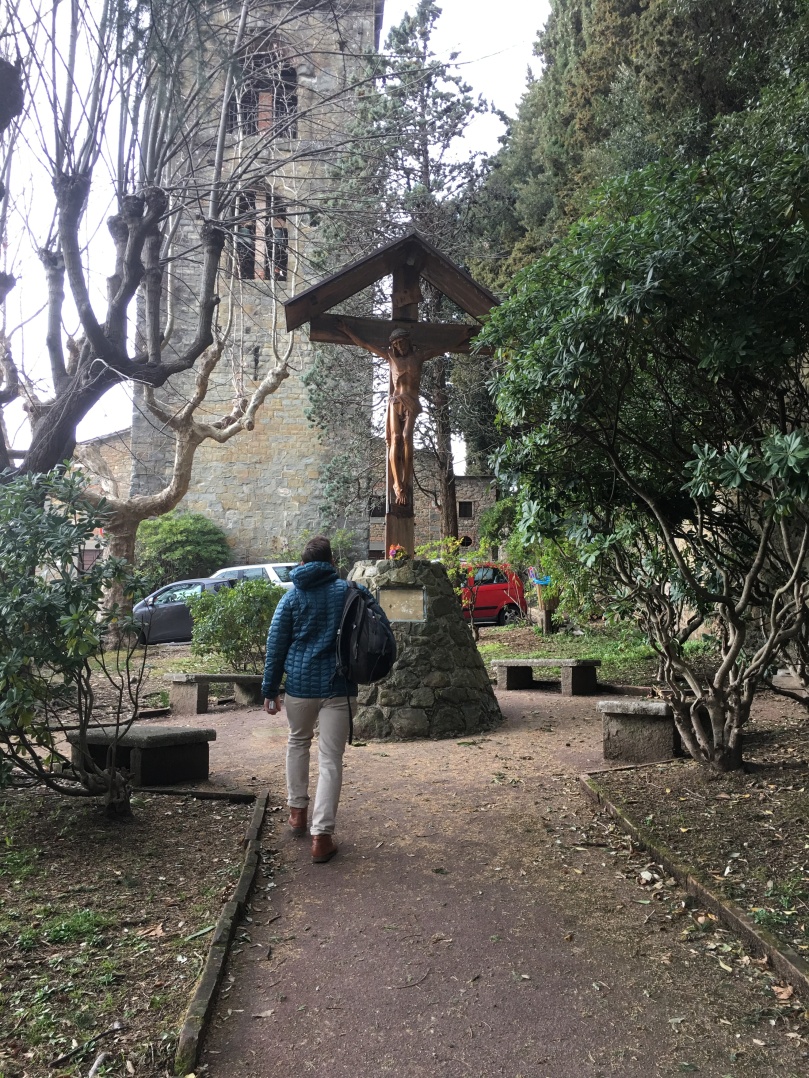 We took some pictures and then drove back down the little mountain where we had some coffee at a small bar. 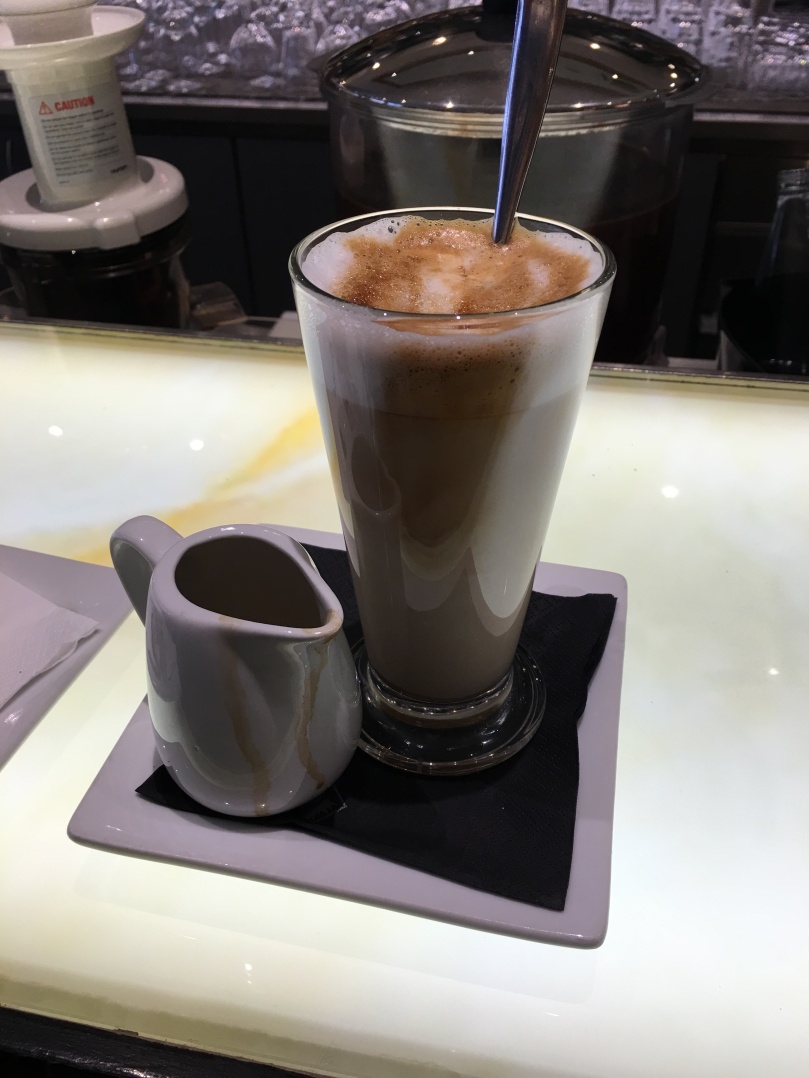 Then we drove out to a nearby town called Montecarlo were our hotel manger suggested we go for a winery tour at a very old family winery called Fattoria Del Teso.  There, we found an empty winery and a host waiting for us with a private winery set up! The “tour” paired locally made honey, cheeses, and prosciutto with the best wine either of us have ever had! 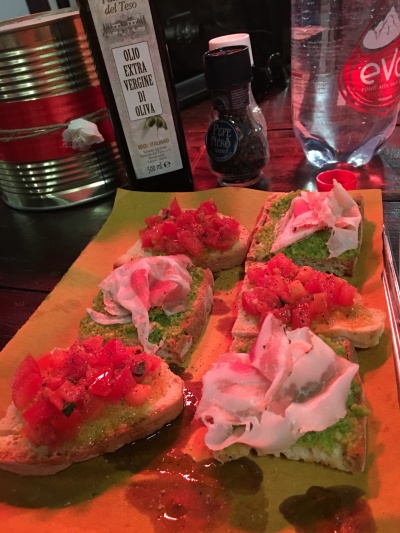 After tasting all 7 of their red and white wines, we still wanted more of their house red, so we asked how much a bottle of the wine would cost and it was only 18 euros! Like, this wine tasted better than the Octagon wine from Jefferson Vineyards, (which is 6 dollars A GLASS btw) and this wine that was literally the best either of us have ever had was 18 euros total. We bought a bottle and decided to take it home for our next special celebration. 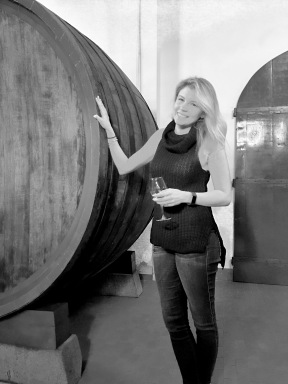 Continue reading with to Our Italy Trip: Part 2, Rome!